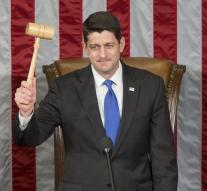 washington - Paul Ryan on Tuesday officially re-elected as chairman of the US House of Representatives. The Republican, who frequently negative comments at during the election campaign about Donald Trump, received 239 of 435 votes cast.

The 46-year-old Ryan was given the key post over a year ago and developed at a rapid pace to a political heavyweight. It was a moment whether he would get well enough support because of his criticism of Trump in their own circles. The delegate from Wisconsin but acquiesced in the party discipline after the Republicans shut the rows. Only one renegade preferred another.