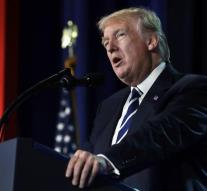 washington - The US President of the House of Representatives, Paul Ryan, recorded Thursday for President Donald Trump. He stressed that Trump is a newcomer in politics and presumably insufficiently realized that the FBI should be independent of the White House.

Trump is under fire because of the resignation of FBI director James Comey, who was in charge of investigating Russian interference in the elections. The president would have asked the former FBI boss for his loyalty.

Ryan said at a press conference on Thursday that Trump 'is a newcomer in government, so I think he's learning things going on. 'The Republican stressed that he did not mean that the inexperiencedness of Trump could be spoken as an excuse. 'It's simply my observation. '

In the meanwhile, the White House announced that Trump is determined to ensure that American elections can not be affected. 'The president takes our elections very seriously,' said a government spokeswoman.