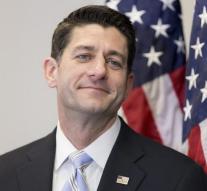 As chairman Paul Ryan wants to stay, he will have in January certainly get 218 votes. The House of Representatives has 435 voting members.

In the run up to the presidential elections Ryan was repeatedly at odds with Trump. Ryan said Tuesday that he bet on good cooperation with the next president.