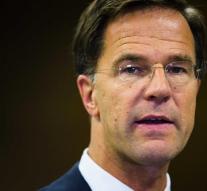 - Prime Minister Mark Rutte called the situation in Turkey,, worrisome '. He has declared through a spokesman to the ANP know. Rutte is in Mongolia for a Euro-Asian summit.

Rutte is in close contact with Minister Bert Koenders of Foreign Affairs on the developments in Turkey. The government closely monitors the developments, the spokesman said.

The Turkish army is trying to seize power by President Recep Tayyip Erdogan. Which has called on the population to rise up against the coup attempt and the road to go on.


Dutch nationals in Turkey should stay inside for the time being. That advises the Ministry of Foreign Affairs.

,, At the moment there is in Turkey a coup attempt going on ', says the ministry on its website and on Twitter.,, The situation is not clear yet. Stay indoors and follow the developments. Through the advice, but also through the media. '

Several other countries have given their nationals Friday similar advice.