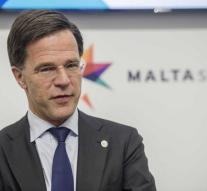 valletta - The idea of ​​a group of EU countries to form a kind of breakaway to make faster decisions, find Mark Rutte not the biggest advocate. His Belgian colleague Charles Michel suggests Friday at the EU summit in Malta in order to form a sort of core Europe in areas such as defense, counter-terrorism, energy and investment.

' What you do not want is a breakaway that goes federate '', said the Prime Minister. ' In many respects Europe should just meddle with fewer things. '' Rutte is in itself not contrary to accelerate parts of countries that want faster. He thinks, among other things ' much untapped potential '' on the digital and services. Also in the field of curbing migration sees opportunities for cooperation between smaller groups of EU countries.