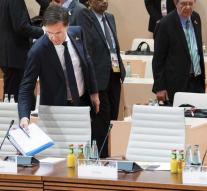 hamburg - The Netherlands is going to talk to Russia about the state of affairs surrounding MH17. Prime Minister Mark Rutte agreed on Friday night with Russian President Vladimir Putin, so he announced on Saturday after the G20 summit in Hamburg.

'Our ambassador to Moscow will talk to Poetin advisors,' said Rutte, who had no scheduled meeting with the Russian leader. 'He sat behind me at the concert we all attended the Elbphil Harmony. At the end I asked if we could talk. 'The Prime Minister did not want to say anything about the conversation or Poetin's reaction.

In the MH17 flight in July 2014 above Eastern Ukraine, 298 people came to life. The Safety Research Council concluded that the plane was dropped at a height of 10 kilometers by a Type of rocket rocket. At that time, a pro-Russian uprising was taking place in the region.

On Friday, the Netherlands and Ukraine in The Hague signed the treaty which allowed the MH17 flight to take place in the Netherlands. The people on board came from seventeen countries.