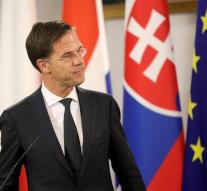 valetta - Prime Minister Mark Rutte is confident that Malta will implement earlier agreements as it takes over the EU presidency from Slovakia on 1 January. Rutte said Friday in Malta, where the prime ministers of the three countries discussed the agenda for the coming period.

Prior to the Presidency Netherlands last January took over for six months, the three countries agreed that the EU should focus on growth, jobs, competitiveness and security. ' There has been significant progress, but there is still much to do, '' said Rutte. ' Economic growth is still too low and unemployment too high. I am confident that we can achieve more goals. ''

Rutte wants the countries together next June if necessary, take the measure if delays.