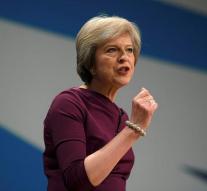 - Prime Minister Mark Rutte Monday at the end of the day receives his British counterpart Theresa May in Turret. It is an introductory visit.

High on the agenda is the decision by Britain to leave the European Union. It also discussed the political and economic relations between the two countries.

On June 23, voted a slight majority of Britons a referendum on leaving the EU. It marked the end of David Cameron's premiership. He was soon followed by Theresa May, until then Minister of the Interior.

May announced last week that it will demonstrate the latest the end of March when Britain will leave the EU.