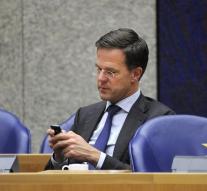 - Prime Minister Rutte online this year the most talked politician. According to research from Coosto, a company that makes social media monitoring. The searched forums, blogs and social media like Facebook, Twitter and Instagram on Dutch posts.


The Prime Minister will PVV leader Geert Wilders (number 2) and US President Barack Obama (No. 3) behind. Dijsselbloem Minister (Finance) is in fourth and Russian President Putin ends 5.
Rutte was much discussed because of his absence. Whereas in the Netherlands becoming increasingly intense debate about the refugees, Rutte was elsewhere. #waarisrutte example was trending topic on Twitter. Or Rutte should be happy with his lead is the question. According Coosto Rutte was mainly a 'laughing stock' on Twitter.
The protagonists in the aftermath of the Teevendeal (Teeven Opstelten and Van Miltenburg) took remarkably, not the top five.