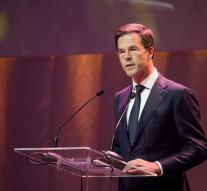 the hague - 'A next step on the way to finding truth, the trial of suspects and rejoicing for the relatives. This remains the top priority for the Dutch government. '' This is how Prime Minister Mark Rutte responds to Facebook on the decision to try to defend the suspects of the flight of MH17 flight in the Netherlands.

According to Rutte, the criminal investigation into the withdrawal of flight MH17 is a matter of long breath. 'But progress is being made step by step and we arrive at a stage where clarification is needed about the legal framework within which prosecution can take place. It is therefore good that the countries involved in the international criminal investigation (Netherlands, Ukraine, Malaysia, Australia and Belgium) have now jointly decided that prosecution and trial of suspects in the Netherlands will be embedded in international cooperation and support. ''

Minister Bert Koenders (Foreign Affairs) points out that cooperation between the countries concerned has been of great importance in this complex case. 'MH17 has shown how a shared destiny can lead to close international cooperation and determination to do justice.'