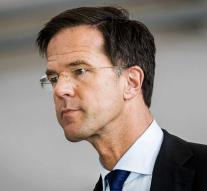 - Prime Minister Mark Rutte talks Monday with the part of the opposition on the outcome of the referendum on the treaty between the EU and Ukraine. He wants to know what solution the leaders of CDA, D66, Christian Union, GroenLinks and SGP live.

In April, a majority voted in a consultative referendum on the treaty. Rutte then had to go find out in Brussels in a way that does justice to the no vote. The Chamber wants Rutte occurs next month with a reaction to the results.

The opposition has previously indicated that justice must be done to the outcome of the referendum. For a possible compromise with the other EU Member States Rutte needs the support of opposition parties. The Cabinet does not have a majority in the Senate.

Rutte has consistently said that the chance that fails his mission. Then the Netherlands will not ratify the treaty.