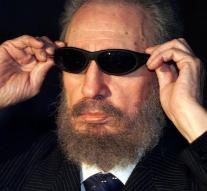 - Fidel Castro was one of the most prominent faces of the twentieth century. That said Prime Minister Mark Rutte in response to the death of former Cuban dictator. ' Fidel Castro wrote world history. He spans person in a period of the Cuban Missile Crisis to the historic handshake between his brother and President Obama. Under his rule, also found serious human rights violations instead, 'Rutte said Saturday.