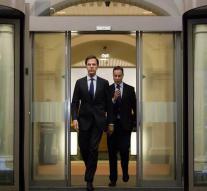 The consideration starts at 10. 30 hours. The leaders are trying to formulate a clear response to the British decision. Tusk said earlier in the morning that the EU was prepared for this outcome.

Rutte slide in his role as temporary EU president and state to the press after the meeting.


The prime minister is disappointed with the result, he said on his departure from The Hague.,, It is also an incentive to reform the EU. Our interest is the impact on the Netherlands to keep as small as possible, we provide stability for our economy. ''