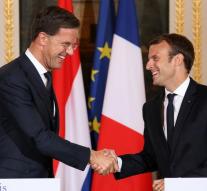 the hague - The British government must do its best to bring the negotiations on the departure of the British from the European Union to a good and soon end. There is still too little progress, Prime Minister Mark Rutte and French President Emmanuel Macron.

Rutte visited Macron on Thursday in Paris. The pair point out that the EU can only make agreements with the British about their future relationship once a number of other issues have been dealt with. For example, the rights of EU citizens in the United Kingdom and vice versa must be ensured, there must be clarity about the financial settlement of UK EU membership and agreements have to be made between the EU Member State Ireland and the United Kingdom. This border has been an internal border, but it will soon become an external border of the union.

The main negotiator on behalf of the EU, Michel Barnier, spoke earlier on his impatience. Only progress in the negotiations on the Irish border was made last week.