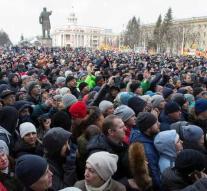 kemerovo - Hundreds of residents have taken to the streets in the Russian city of Kemerovo. They demand a statement about the cause of the fire in a shopping center that resulted in more than 60 deaths.

They also want a list of the names of the victims, according to the Russian news agency Interfax.

According to official figures, 64 people, including 41 children, died in the fire. After a visit to the morgue, a group of family members and residents confirmed that 41 children are among the dead. Many have not yet been identified.

The fire broke out at the beginning of the evening in a children's paradise on the fourth floor of the shopping center. The fire then spread quickly.