Home / World / Russians like Airbus A321 on the ground 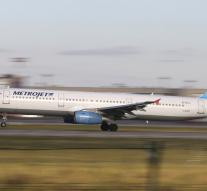 moscow - Three days after the accident involving the Airbus A321 of Metrojet in the Sinai desert, the Russian aviation authorities Tuesday decided to keep the same aircraft on the ground. The device, which would carry out a flight from Moscow to St. Petersburg, was the flight due to technical problems replaced by another aircraft, reported the Russian news agency Tass.

The unit of Metrojet collapsed Saturday by unknown cause down at Sinai. None of the 224 passengers survived the disaster.