Home / World / Russians do not believe in shelling convoy 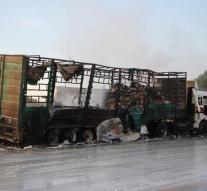 moscow - Russia does not believe that the aid convoy heading to Aleppo Monday strafed by planes or shells from the ground. The Defense Ministry in Moscow holds that the trucks have caught fire.

A spokesman for the department said Tuesday that only the supervisors of the United Nations can provide an answer to the question about the cause. He added that in the vicinity of the convoy only militants from Jabhat Fateh al-Sham (the former Nusra Front) were present.

The Russians are also among others the Americans in New York at the United Nations, where the Syria International Support Group gather to watch include whether the cease-fire that ended Monday, new life can be breathed. The two superpowers both seem inclined to lift a new file from scratch.