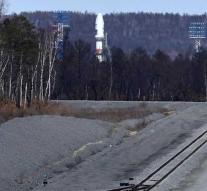 According to Russian media, about 7.5 billion rubles, equivalent to 108 million euros, were misappropriated when constructing the Vostotshi Kosmodrome, the rocket base. Part of it disappeared in the pockets of contractor Dalspetsstroi. Three top people have now been sentenced.

Russia launches most of the missiles from the Baikonur space base, which is located in Kazakhstan. That was no problem for Moscow at the time of the Soviet Union, because it was one country. Kazakhstan is now independent and rents the area to Russia.

Moscow wants to keep its launches in its own hands and has therefore laid a new foundation in the far east of the country. It cost several billions of euros. The complex is not completely finished yet, but a few rockets have already been launched.