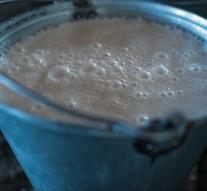 moscow - Researchers from the neutral food watchdog in Russia recorded an excuse list of milk-added products: starch, lime and soap. The dairy producers make a mess of it, but they are not the only substances that add variety to their products.

The Moscow Times writes that was found in research in one fifth of the caviar marks the notorious E. coli bacterium. Bakers turn out to stop ongoing savings by so-called 'wheat from the fifth grade' in their bread. That is grain which is normally used as an animal feed. Also fish is not always reliable. Half the salmon purchased the organization in the supermarket, was identified after checking as 'unreliable'.

The food watchdog complains about lack of government control in the food industry. Same sector lobbied ever- successfully- for less state control. But adopt its own products, has apparently also its limitations, according to the watchdog.