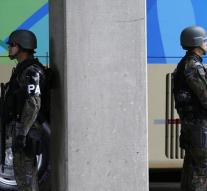 - The mystery of the alleged involvement of the Russian vice consul at the shooting of a robber near the Olympic Park in Rio de Janeiro seems to be solved. The man, who wrest the gun from his attacker knew Thursday and then shot him, police had given false identity papers. It would appear that he was Russian vice consul. The shooter turned out just to be Brazilian, local media reported Friday.

Police had initially transmitted information if the shooter was a Russian diplomat. The Russian Embassy in Brazil immediately denied any involvement in the shooting. According to the embassy, ​​the man who shot at the robber not a Russian name, while all diplomats do have.

According to the newspaper O Globo was the 'vice consul' with his wife and daughter in a car. When they stopped in heavy traffic, two men came on a motorcycle alongside. One of them hit the window with a gun. The man, who is trained in the martial art jujitsu, responded quickly. He snatched and fired the weapon, O Globo described the events. The robber died at the scene. His accomplice fled.