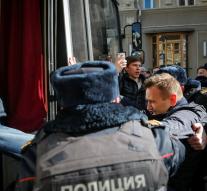 moscow - Russian police on Sunday, opposition leader Alexei Navalny in the center of Moscow arrested during a demonstration against corruption.

Navalny who had called for the demonstration, was arrested in the shopping street Tverskaya Ulitsa and put in a car detainees. Hundreds of protesters were trying to avoid being discharged.

Besides tackling corruption, the protesters demanded the resignation of Prime Minister Dmitry Medvedev.

Navalny wrote on his website that Sunday would be demonstrated in at least eighty cities in Russia and that the authorities had no objection in most cases.

The Kremlin said the announced demonstration in the center of Moscow 'illegal provocation'.