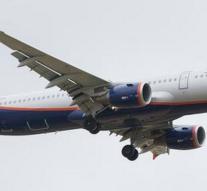 geneva - An airplane of Aeroflot Thursday at Geneva airport just before departure to Moscow stopped after a passenger had said that a bomb was on board. The man, a Russian, was arrested. That said, the Swiss Public Prosecutor.

The 115 passengers are asked to leave the plane so that the police could search specialists. Travelers will be transferred according to the Russian society on another flight.