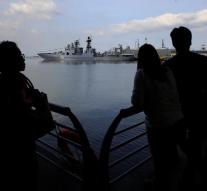 manila - Russia has further approaches to the Philippines. Two Russian warships arrived Tuesday in the Asian country for a four-day visit. The Russians have, among other things offered to train the Philippine Navy in combating piracy and terrorism.

The Philippines are traditionally an ally of the United States, but that relationship is under pressure. President Rodrigo Duterte sent last month, Foreign Ministers and Defense to Moscow to discuss a possible weapon purchase.

With the visit of Russian warships has put a new step in strengthening relations. It is according to the Philippine authorities to the first official contact between the navies of both countries.

Duterte warned last month that Washington should prepare to withdraw from the agreement on the stationing of troops and equipment for military exercises. The president is angry about US criticism of the violent approach to the drugs problem in his country. 'Bye-bye America,' he proclaimed.