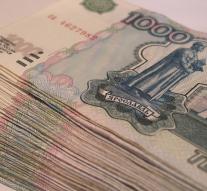 moscow - There are money launderers and smugglers, but Aleksandr Grigoriev beats everything. The 44-year-old Russian businessman was at a restaurant in Moscow arrested on suspicion of embezzling the equivalent of 42 billion euros from Russia.

The business newspaper Kommersant found out that he had devised a scheme to transport the black money of hundreds of wealthy through dozens of banks abroad. Grigorijev, itself co-owner of several financial institutions, is additionally accused apart from a slight ' fraud worth almost one million euros.

Justice suspects that the money magician is also involved in organized crime. It is about a gang of more than five hundred people that uses sixty banks to eliminate the sales and profits.

Grigoriev denies, but pay bail to get at large, was not there.