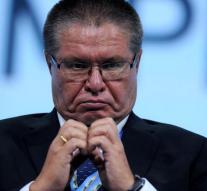 moscow - The Russian Minister of Economic Affairs Alexei Ulyukayev has been arrested on suspicion of bribery. The minister would have received 2 million dollars for a positive review, which caused oil producer Rosneft half became owner of Bashneft, the sixth oil company in Russia. That said the inquiry Tuesday.

Rosneft received the positive test Ulyukayev 50 percent of Bashneft shares. The researchers say that the indictment will be announced soon.