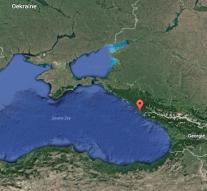 sochi - A Russian military plane with 91 passengers on board Sunday shortly after takeoff in Sochi disappeared from the radar. Local media reported that the plane owned by the Russian Defense Ministry was on its way to Syria.

A source of the Russian news agency RIA said 91 people were on board, including several journalists. The plane disappeared shortly after leaving the radar when it flew over the Black Sea in Russian air field. There is an ongoing quest.