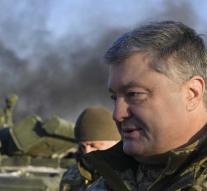 kiev - Russian men between sixteen and sixty years are no longer allowed to enter Ukraine. That is what the head of the border guards declared on Friday. In Ukraine, the state of siege is in force following an incident in the Sea of ​​Azov.

Russian border control seized three Ukrainian ships that had entered the Sea of ​​Azov via the Kerch Strait. The crews were taken and held.