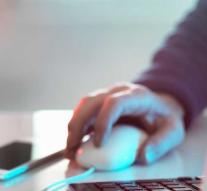 new port - A Russian hacker who has been tried in the United States has known that there is guilt. Peter Levashov would have led the infamous Kelihos botnet. That is a network of tens of thousands of hijacked computers that were linked together.

Levashov, who used the hacker's name Petr Severa, had been infiltrating the computers of others since the nineties. In 2010 one of those networks was discovered. It was named Kelihos.

Kelihos intercepted usernames, passwords, credit card details and personal information from unsuspecting people. They were sold for a lot of money on the black market. Kelihos also distributed billions of spam emails per day. The hijacked computers could also be used for DDoS attacks and for spreading host software. Other cyber criminals could use the network for a fee.

Levashov was arrested in April last year during a family holiday in Spain. That land delivered him to the United States. He hears his sentence on 6 September next year.

The United States also prosecuted a few other large Russian hackers, such as Yevgeny Nikoelin and Andrej Tjoerin. Roman Seleznev was arrested in the Maldives and he is now serving in the US a prison sentence of 27 years. Another hacker, Alexander Vinnik, is stuck in Greece. The United States, Russia and France have asked for his extradition.