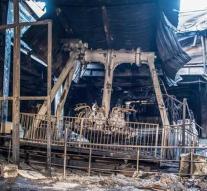 moscow - Governor Aman Toelejef of the Russian Kemerovo region, where dozens were killed by the fire in a shopping center, has resigned. The Russian state press agency Sputnik reported that Toelejef voluntarily resigns.

The authorities in Kemerovo are under fire after last week's devastating fire, because the population's relief was far too slow. The large number of victims would also be due to non-compliance with the fire safety regulations. 'With such a heavy burden, it is impossible to continue working as a governor,' said 73-year-old Toelejef.

President Vladimir Putin has accepted the resignation and appointed Sergei Tsiviljov, one of the substitutes of Tutjef, as the new governor of Kemerovo. Putin said earlier that the fire was the result of 'criminal negligence' and that those responsible will be punished.

According to the Russian authorities, the fire killed 64 people, including 41 children.