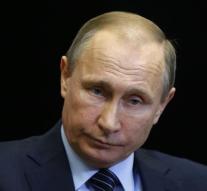 sint - The Russian government is not engaged in hacking and influencing foreign elections. However, President Vladimir Putin can not rule out the fact that individual hackers operate on their own. 'The government is in no way involved,' he said in St. Petersburg on Thursday.

Putin emphasized in a conversation with international press agencies that he wants to fight cybercrime with international partners. According to the president, foreign election campaigns do not endanger. 'I am convinced that hackers can not influence elections in other countries, such as in Europe and the United States. '

US intelligence services accused Russia of having previously interfered with the presidential elections. The Russians would have leaked e-mails from the Democratic Party.