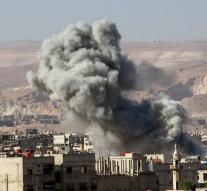 moscow - The Russian embassy in Damascus has been under fire from areas controlled by jihadists. This let the Russian Foreign Ministry announced on Tuesday.

The shelling was Monday. The Ministry establishes a link with 'the way the US fueling the Syrian civil war. '

The news Sputnik reported that the Kremlin has determined that the shelling was done from regions of the al-Nusra Front and the militia Faylaq al-Rahman. The last battle group is a collection of Islamist militia that is moderate by the standards of the Syrian Civil War and is connected to the Free Syrian Army. Supported by Washington.

The al-Nusra Front is made up of Sunni extremists who are classified as the Syrian branch of al Qaeda. They have declared that they have turned away from al Qaeda, to get a better image in the West and Turkey. They call themselves Jabhat Fateh al-Sham.

Monday Washington broke off dialogue with Moscow on a cease-fire in Syria. According to the White House's patience with the Russians.