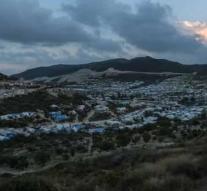 damascus - A Russian military aircraft has disappeared from the radar in Syria when a rocket attack took place on the Syrian coastal town of Latakia. There were fourteen soldiers on board the IL-20.

According to the Russian Ministry of Defense, Israel and France have carried out an air strike on Latakia on Monday. At that time, the plane returned from the Mediterranean to the Syrian airbase Hmeimim, just south of the city. 35 kilometers off the coast, the aircraft suddenly disappeared from the radar.

According to Syrian state media, the anti-aircraft intercepted several missiles. Ten people were injured. Eight of them were allowed to leave the hospital soon. The Syrian Observatory for Human Rights, based in the United Kingdom, says that heavy explosions have been heard in the city. The shelling would have been directed against ammunition storage sites.

An anonymous American official states that the Russian reconnaissance aircraft was probably accidentally shot from the air by the anti-aircraft police. How the crew members are ready is not known. Russia has started a rescue operation.

Latakia, which lies on the Mediterranean Sea, is in the hands of the Syrian government.