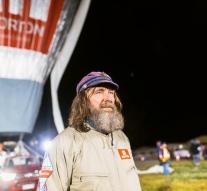 canberra - The Russian balloonist Fedor Konyukhov on Saturday set a world record by just over eleven days to travel around the world. According to Australian media on Saturday flew the Russian airport in the Australian Northam where he was left on July 12 for his journey.

He broke the old record that name was the American Steve Fossett. Which had in 2002, thirteen and a half day needed to complete the earth in a hot air balloon.

During his trip Konyukov sometimes flew at an altitude of 10 kilometers and he had to deal with extreme temperatures as high as 56 degrees below zero.