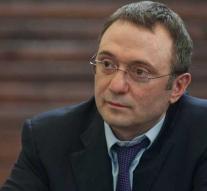 aix-en-provence - Russian billionaire Soeleiman Kerimov has been cleared of money laundering in France and is allowed to leave the country. That is a big disappointment for the French Public Prosecution Service in this politically sensitive case. 'This puts an end to the accusations against Kerimov. This is very good news for him and a great legal victory. ', Jacqueline Laffont, one of his lawyers, responded.

The public prosecutors accused Kerimov of money laundering that he had obtained through tax evasion in the purchase of real estate. These were luxury villas on the Côte d'Azur with a total value of hundreds of millions of euros. The trial was seen in Russia as a witch hunt on wealthy tycoons with good relations within the Kremlin.

The public prosecutor called the statement 'surprising' but did not want to go into it. He first wants to study the judgment that has not been made public. There is still a possibility to appeal to the highest court. Kerimov was arrested in November when he left his private plane in Nice. He was released on bail but was not allowed to leave France.