Home / World / Russian and US to the table on Aleppo 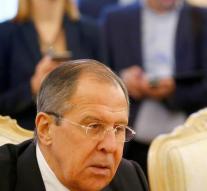 moscow - The Russian government announced Monday by the United States to talk about withdrawal of rebels from the Syrian city of Aleppo. Those talks commence Minister Sergey Lavrov (Foreign Affairs) Tuesday night or Wednesday morning in Geneva.

Lavrov warned that armed groups who refuse to leave the city do not have to count on leniency. 'We will treat them as terrorists and extremists. And we will support an operation by the Syrian army against these criminal groups. '

Washington has not yet confirmed that indeed will be negotiated withdrawal from Aleppo. The rebels declared last weekend not wanting to leave the city. Nevertheless approved an official opposition that the insurgents may have no choice if they want to spare the inhabitants of the area.

Syrian government forces captured the last time in the east of the city much of the area formerly held by the rebels. Recent fighting took place included less than a kilometer away from the famous Citadel of Aleppo.

The Russian Defense Ministry accused the rebels there have bombarded Monday in a military field hospital in the city. In addition, a female medic would have lost their lives. Two people were injured.

A spokesman for the department pointed an accusing finger at the United States, Britain and France. Those countries would share responsibility for the artillery shelling of the aid station, because they support the rebels.