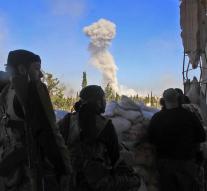 - Defense specialists from Russia and the United States on Thursday held consultations again in a video conference on measures to improve security in the Syrian airspace. They were satisfied with the results.

The intention was to cultivate mutual understanding and dangerous situations in future misunderstandings to occur during flights over Syria and the border with Turkey. Both American and Russian jet fighters in this conflict region active but serve different purposes.

Moscow wants to keep in the saddle the controversial Syrian President Bashar al-Assad, Washington has with its allies allied Islamic State declared war. On occasion were fighters from both sides cross each other so that it almost caused an accident.