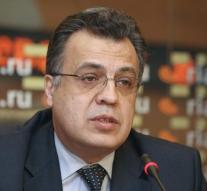 ankara - UPDATE 17:26 am- The Russian ambassador in Turkey was shot Monday in Ankara, according to NTV.

It would be Andrei Karlov. According to CNN Turk, he is in critical condition in hospital. The station also reports that several people have been injured.