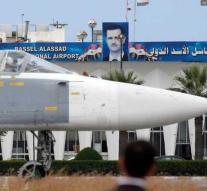 moscow - A Russian plane crashed on the landing at an air base southeast of the Syrian port city of Latakia on Tuesday. As a result, all 32 occupants were killed, reports the Russian Ministry of Defense.

When landing at Hmeymin airbase, not far from the Mediterranean, there is no need to fly over areas that are in the hands of rebels or jihadists. The Russian authorities are thinking of a technical defect in the Antonov An-26 aircraft.