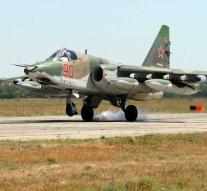 amman - For the first time in four days, Russia has carried out air operations in southwestern Syria. That reported the Syrian Observatory for Human Rights. Shortly before, a Syrian rebel leader reported that negotiations with Russian officers about ending the fighting in the south had failed.

Negotiators of the rebellious Free Syrian Army (FSA) said there was disagreement over the surrender of heavy weapons. The Russians demanded that the rebels surrender heavy weapons and allow a number of territories in the province of Daraa to come under the control of the Syrian government. In return, fighters with their relatives could leave those areas.