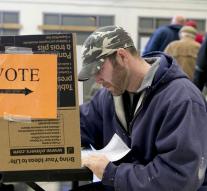 - The electoral commission in Oklahoma has rejected a request from a Russian consul general in the state wanted to monitor the presidential elections on 8 November. The request came from the Russian Consulate in the Texas city of Houston. The reason for the refusal gave the committee that foreign representatives are not allowed in polling stations.

In the published letter asks Consul General Alexander Zakharov consent for the stationing of a diplomat ' in one of the polling stations of Oklahoma with the aim of studying the American experience in organizing the voting process. ''

Chris Benge, the highly responsible for the external relations of Oklahoma, expressed his hope that Russian diplomats to follow the US electoral process on television.

Zakharov did earlier similar requests to the authorities of Texas and Louisiana, reported local media. Even those were rejected.

This month, Washington accused Russia officially carry out cyber attacks against the Democratic Party. The US State Department expressed no concern about the fact that the Russians are coming up with a request to monitor the US presidential election. ' We have nothing to hide and we believe in the electoral process, '' said a ministry spokesman.

The relevant diplomatic post of Russia in Houston was not available for comment.\n  \n  \n   advertisement

Russia would like to exercise the cyber attacks on Democratic organizations influence the elections. The Kremlin called this allegation ' nonsense, '' said the Russian news agency Interfax.