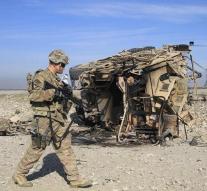 moscow - Russia is prepared to work more closely with the US and other NATO countries to pursue goals together in Afghanistan. This emphasized the Russian Ministry of Foreign Affairs in a report published Thursday. The Kremlin thereby reiterated its concern about a possible withdrawal of US troops from that country.

The new US president Donald Trump has made no secret of his dislike of expensive foreign military missions. The US commander in Afghanistan, Gen. John Nicholson, complained Thursday on a visit in Washington that 'Russia and the US to undermine NATO in Afghanistan. 'Russia would' support to legitimize the Taliban, 'said Nicholson.