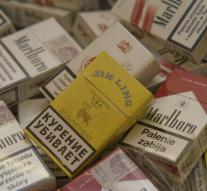 moscow - Russia is considering banning the sale of cigarettes to anyone born after 2015. Thus the country would be the first in the world to take such a harsh measure.

On the plan of the Ministry of Health are still many doubts. So ask critics to enforce such a ban. There is also fear that tobacco will be sold on the black market, where there is no supervision and youth therefore possible to buy toxic neptabak.

A spokesman for the Kremlin said to the British newspaper Times that plans must be carefully considered and that advice be sought from the various ministries.

In Russia, smokers were able to a few years ago often go anywhere their business undisturbed. It was only in 2013 started smoking bans in public places. Then increasingly stringent regulations was introduced.