Home / World / Russia: 'US missiles are being shot from the air' 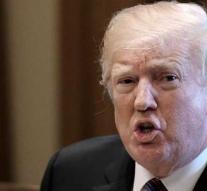 beirut - American missiles fired at Syria will all be shot from the air and the launchers will be attacked. The Russian ambassador in Lebanon has announced this.

Aleksander Zasipkin pointed to a statement by Russian President Vladimir Putin and the Russian Chief of Staff in that direction. 'If there is an attack by the Americans, the missiles will be knocked down and also the place where they were launched'.