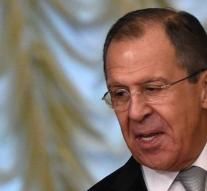 moscow - Russia wants Turkey to pursue those responsible for the death of the pilot of a downed Russian fighter jet in November. That said a spokeswoman for the Russian Foreign Ministry Wednesday according to news agency Sputnik.


Turkish fighter jets fired the Russian Su-24 on November 24 down because it violated Turkish airspace Ankara. Russia argues that the device over the northwest of Syria was in action against jihadists. The pilot would be shot dead by Turkish rebels when he wanted to with his parachute to safety.
The Russian spokeswoman pointed the finger especially towards Alparslan Çelik, a mayor's son from Turkey. He was the far-right Turkish group Grey Wolves belong and be a leader in Turkmen rebels in Syria.
In it were two Russian fighter pilots. The other pilot was able to be brought to safety.
On the issue between Ankara and Moscow arose a quarrel which increases even further. Russia announced economic sanctions against Turkey and this week have once again increased.
NEW