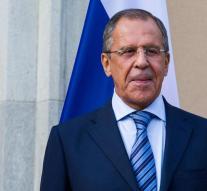 The four soldiers were the first Turks who were killed at the hands of the Syrian government army since Ankara three months ago, ground troops and tanks sent across the border. Turkey wants both IS and armed Kurds expel from the border. Additionally supports the Turkish government rebels who want to get rid of President Bashar al-Assad.

Russia is correct Assad's main ally. Though Russia and Turkey dramatically disagree on the Syrian civil war, said Foreign Minister Mevlut Cavusoglu after his meeting with Lavrov they agree on the need for a ceasefire.