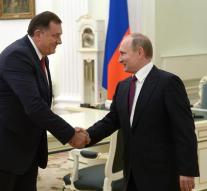 belgrade - Russia gave the Bosnian Serbs his support for the controversial referendum that they want to keep Sunday. The Bosnian Serbs have \'every right to decide for themselves,\' said President Vladimir Putin, according to Serbian media against their leader MiloradDodik.

The Bosnian Serb government puts the population Sunday or the republic January 9 must designate a national holiday. The highest court in Bosnia has banned the plebiscite, because Bosnian Muslims, known as Bosniaks, would hurt. The date recalls the declaration of the first Bosnian Serb republic in the nineties, the beginning of the bloody war in Bosnia. The referendum, moreover, paves the way for a referendum on the secession of Republika Srpska from the rest of Bosnia, many fear at home and abroad.

Feelings get in the run-up to the referendum, more and more heated. Some prominent Bosniaks threatened in recent days, even with war. Neighboring Serbia, the main pillar of the Bosnian Serbs, responded equally combative. \'If they want war in Bosnia they can get that,\' said Foreign Minister Ivica Dacic. The nationalist President Tomislav Nikolic announced a higher state of readiness.

Since the end of the Bosnian war, the Serbs share the national government with the Bosnian Croats and Bosniaks. They enjoy their Republika Srpska in addition, a large degree of autonomy. But the discord between communities flared up again recently. The can do little against Bosnia and representative of the international community because Russia, one of his clients, supports the Bosnian Serbs.