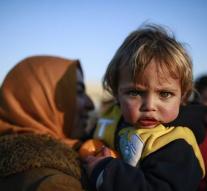 new york - Russia will in the UN Security Council veto to send a French proposal for independent observers to the Syrian city of Aleppo to ensure an orderly evacuation of civilians from the eastern districts and the protection of those who remain behind.

Russian UN Ambassador Vitali Tsjoerkin said Sunday that he is not opposed to monitoring, but the French resolution asking for trouble because it does not take into account a thorough preparation. ' That we can not support. It is a disastrous idea that they go wandering around the ruins of eastern Aleppo without adequate preparation and without telling anyone what is about to happen. ''