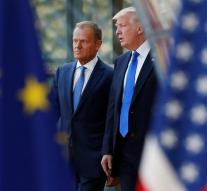 brussels - The EU and US do not agree with Russia. European President Tusk said that after a meeting with President Trump in Brussels.

Trump spoke on Thursday morning with Tusk and Commission President Juncker, later Mr Mogherini and President of the European Parliament also told Tajani for the meeting which would last an hour.

According to Tusk, they discussed foreign policy, security, climate and trade. They did not even agree about climate and trade. Trump is threatening to quit the Paris climate agreement, although it is still unclear whether he will actually do that. In addition, he wants to pursue a protectionist trade policy.

But especially the issue of Russia was a splash fungus, evidenced by Trump's explanation. There are still sanctions against Russia because of the Russian role in the conflict in Ukraine. The (alleged) ties between Trump, or his team, and the Russians have already put him into serious trouble.

'I'm not 100 percent sure we can say today- that is, President Trump and I- that we have the same opinion about Russia. Although when we talk about the conflict in Ukraine we are on the same line, 'said Tusk.

After his visit to the EU, Trump had a lunch with the new French president Macron. Later on Thursday he goes to NATO where he will lead all the leaders. It is an afternoon of symbolism with the transfer of the new NATO headquarters and the unveiling of two monuments.

During dinner, Heads of Government and Heads of State will talk about raising defense spending and the fight against terror. NATO will officially join the anti-IS coalition that is fighting in Iraq and Syria. The treaty organization, however, is not going to fulfill any combat tasks but focuses solely on a coordinating role and training of military trainers.