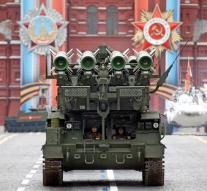 moscow - With a grand military parade on the Red Square in Moscow, Russia shows its military power to the world. Among other things, new air defense systems that can operate in the extreme freeze show in the pool area went to President Putin.

The parade is held every year to commemorate the victory of the Soviet Union on Nazi Germany. It was the first time the Tor-M and the Pantsir SA air defense systems were shown.

The Kremlin has lately attracted more attention to the pool area because of its oil and gas supplies. Russia competes with Canada, the United States and Norway.

'The past teaches us to be vigilant, and that the armed forces of Russia can resist any potential aggression,' Putin said in a speech.

'But to fight the fight against terrorism, extremism, neo-Nazism and other threats, the whole international community must come together... We are open to such cooperation, 'said Putin.

Due to the bad weather, a flying show, which also canceled airplanes deployed over Syria, canceled.

Also elsewhere in the country, including on the Russia-Crimean peninsula, were military parades.

The only foreign leader who attended the parade was the president of Moldova, Igor Dodon. In previous years, German Chancellor Merkel and Chinese President Xi Jinping were also present.