Home / World / Russia sees US policies as a threat 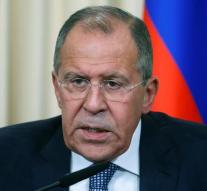 moscow - Russia sees the US policy as a threat to national security. That said Russian Foreign Minister Sergei Lavrov on Sunday in an interview on state television. He accused the US of a hostile attitude towards Russia.

' We are witnessing a fundamental change in circumstances in the policy of the US towards Russia, 'Lavrov said. Moscow has long had strategic patience with Washington. According to the minister, there is ' aggressive Russo phobia' in the core of US policy towards Russia.

Lavrov said that Russia is prepared to defend its own interests, as the US proceed with the bombing of air bases in Syria. According to him, Washington is investigating this option. ' This is a very dangerous game, because Russia there at the invitation of the legitimate Syrian government. We did two bases with anti-aircraft guns to defend our national security, 'said Lavrov.